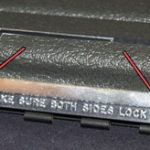 The old rollfilm used the cutter bar along the side of the camera, to do something I don’t really care about. It is held to the camera body by 4 screws. 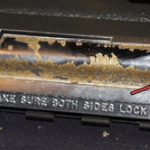 Pry up the leather with a screwdriver and your fingers.

The other two are underneath. 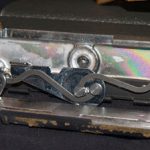 Try to keep the leather in one piece, it will be useful later.

I was planning on replacing the leather anyway so I took less care.

Though I need pieces as in tact as possible for cutting templates.

You’ll notice a purple-black metal mask that goes around the inside frame. This would prevent a packfilm back from being flush with the film plane. However, I should also note that the bellows are attached by some tabs from this metal piece that fold in.
So it is up to you if you want to remove it completely, leave the tabs only or leave it as it is. I chose to remove it and secure the bellows with some glue later.

be careful of sharp edges; pry mask off

Using a screwdriver and pliers, pry this metal piece off. It is held lightly by some glue but mostly by 8 rivets.

Be VERY careful, this is the sharpest edge metal in the whole project! 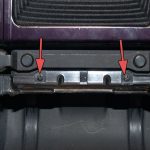 The left hand plastic spool is held in place with 2 or 3 screws.

Underneath the piece is the pin and spring that gives the front door its popping action.

When removing the spool, don’t lose the pieces. 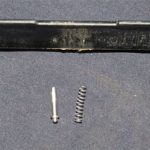 Keep all the parts.

Later the plastic spool will be cut to cover the pin and spring back up again. 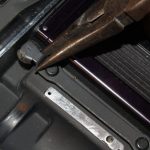 pry at both ends and yank

The last piece to go, for now, is that spring loaded piece of metal.

I can only assume it had something to do with rollfilm, but who cares now.

Pry from both ends, it will come right off. Toss the pieces. 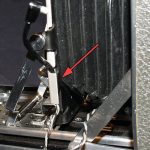 cut and pull out the flash wires

The last vestigial part of the camera to go is the flash wire, that is, if you are going to replace the hotshoe like me.

Open the front and cut the 2 wires. They are routed underneath the focusing rails and are held down by a clip.

Pull it out thru the back of the lensboard and off the camera.