Since no one wants a dirty leather strap, now is a good time to remove it, clean it and set it aside until everything is done.

To open the back, you need to look at the front.

Pull the latch down and the back will now be able to swing open.

Open the back first to the left, then to the right. Feel the weight of those heavy duty rollers.

We really should do something about that. 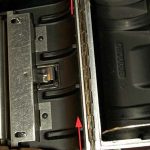 Grab a paperclip or a really thin, hard wire and pull the pins for both sides.

I had an old hinge pin lying around and used that. Try not to bend them, you’ll need one again later. 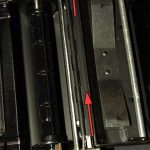 Feel how much lighter the camera is now?

Toss the pressure plate but keep the back door for later.

Inside my camera was still a leftover spool from a roll of film.

The other side has a more attached piece to remove. 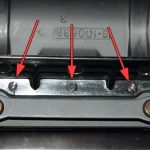 Remove the three screws. On other roll film models, it would come out now.

But on the 95, it is attached to the two metal spool things.

You will need this plastic piece later, so try to salvage it intact. 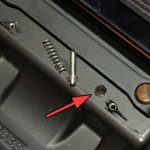 save spring and pin

Just use your pliers to yank the two riveted pieces.

Some wiggling and they should come right off.

When you remove the plastic piece a spring and pin should be revealed underneath.

This is what gives the front door its spring-open effect. Save these for later. 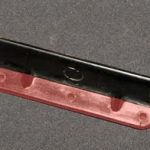 Take the plastic piece and cut it down until all you have is the 3 screw holes.

Later this will be used to cover the spring and pin.

You will need this plastic piece later, so try to salvage it intact.