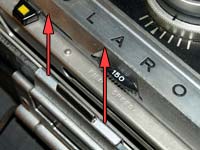 First thing is to remove the front cover. Press on the sides of the clasp and pull up to remove.

You can see the film speed dial here as well. 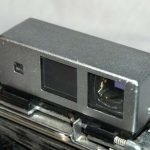 Zeiss finder from the front 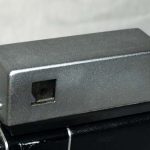 Zeiss finder from the back

This camera is extremely easy to use. Like all Automatic models, it has its 4 main parts marked with numbers. Though, I don’t agree with re-cocking the shutter after you take a photo.

Though not marked with a number, the first thing to do is to fold up the finder.

It is on a hinge that locks in place with a magnet on the body.

Marked #1, you pull the black tab up and the camera should spring open extending the bellows. Pull them out until it locks.

To take a picture you need to correctly set the exposure controls.

On the front of the camera are the film controls. Which is as manual as this camera gets. You set film speed at the bottom. Turning the ring around the lens will change the exposure. The little lens is the meter, electric-eye. 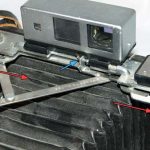 Going back to #1, pull the black tabs to the side. This moves the lens back and forth, at the same time a small arm actuates the finder creating the split-image focus and the parallax correcting frame.

Pulling the tabs to one side brings the lens forward and allows you to focus up close.

The finder changes to reflect the lens movement with a small arm attached to the struts, blue arrow. 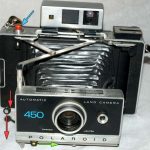 Marked #3, is the shutter cocking arm.

Polaroid suggests cocking the shutter AFTER you take a picture, so as to have the camera ready at a moments notice.

But like any good photographer, you know a cocked shutter is not a good way to keep a camera at rest.

Use the scene selector, green arrow, to compensate exposure for different lighting situations. The scene selected is shown on top of the shutter housing.

Fire the shutter after focusing, blue arrow, to take your picture. However, right now, without battery power, this does nothing. 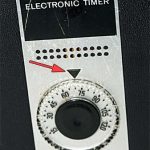 This model has an electronic development timer, which is tripped when film is pulled through the rollers. Turn the dial to set the appropriate time before pulling the film.

When activated the small triangle lights up, and BEEPS when done.